Gary Wittmann, a professional storyteller, has been writing and telling stories all his life. Having been a special education teacher for over 33 years, he’s an expert in understanding children’s needs. But there was one issue he frequently came across with students – bullying.

With statistics showing that more than 25% of kids experience bullying, he knew it was time to set things straight. He decided to make a change by helping children overcome bullying and develop high self-esteem and a healthy emotional outlook on life. He believed that every child deserved to be the champion that he/she is and it was his responsibility as a teacher to walk them through the path of success.

“The statistics shocked me. I knew bullying was prevalent in schools, but the high numbers nudged me to take action. I wanted to make an impact on students’ lives by helping them grow into healthy, contributing members of society.”

However, making a difference is never easy. Over the years, Gary gave one-on-one advice to hundreds of students. He could see the impact his advice had on students, but it was exhausting. More Importantly, it still didn’t allow his message to reach to the extent he wanted. Across the country, millions of children were still being bullied in many places, and Gary knew he could never change that one person at a time.

Gary looked for a medium that would directly help him reach the student community while communicating the message in an entertaining yet enlightening way. He saw writing a book as the way to spread his message. It would help anyone with $20 to directly get the message.

Gary wrote traditionally published books earlier, but it didn’t have the impact he wanted

Being a writer himself, Gary wrote a few traditionally published books earlier. He chose short-stories as the means to bring about his ideas. Although the idea of publishing a book was fulfilling, the entire process seemed to be a daunting task.

His earlier publishers didn’t make enough marketing efforts to sell the book. Gary wanted to hit the best-selling lists, and to do this, he needed to discount his book’s price. But his publishers weren’t willing to do that, as it would reduce their revenue. All of this was discouraging, and it really got to him.

Gary decided to choose a different publisher this time, one that would let him have all the royalties of his book

He figured out he’d self-publish this time and discovered The Books Factory in the process. He knew he landed at the right place to reach his destination.

Gary did the writing himself but wished for a professional, third-party perspective about his work. He wanted professional help to get the book edited and published.

It was only after his conversations with Wayne Purdin, an Editor on The Books Factory team, that Gary knew his book would absolutely meet his set standards. The process was smooth thereafter. Collaborating with The Books Factory, the transition was swift, and Gary’s book was ready within the next two months.

“I had all the questions when we started – about the entire process, pitching the book, publishing intricacies – everything. Vikrant Shaurya and his team addressed all of my needs with utmost professionalism. And the final outcome was the book of my dreams!

If you’re looking to make an investment through your book, The Books Factory should be the place to go. They’ll get it all done with kickass quality and within the stipulated time.”

Finally, his book Fifth Grade Timothy Bottoms Rules was born on month, year. With The Books Factory letting Gary have all the royalties of his book. The copies sold quickly, garnering all the attention he deserved.

To amplify this success further, The Books Factory also built a personal website for Gary, which helped him to easily reach his target audience. All this proved to be of vast help to the book, and it immediately hit the Amazon’s Best-Selling charts.

When Gary began, he had very modest ambitions for the book. Although he knew that it was important to spread the message, he assumed that would be the end. For him, a book was just a way to sync the message with the masses.

Little did he know that a book was going to be the beginning of a new phase in his life!

As soon as the media got wind of this new best seller in town, they were all over it!

Within just a few months into the book launch, Gary and his book have been featured in top-tier news stories – FOX, ABC, NBC, CW, CBS, Digital Journal, etc. improving his presence in the overall media and skyrocketing his brand overnight! 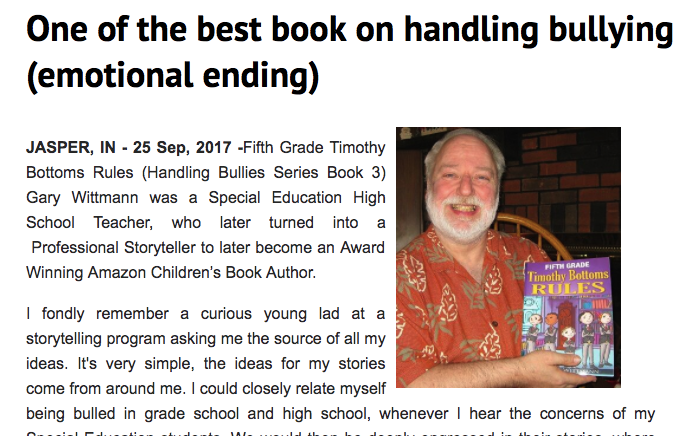 Most importantly, Timothy Rules became a crusade against bullying

Before the book, bullying had been a sensitive issue with a few kids in his class. But after the book, Gary says, there was a significant spike in the number of children approaching him for help. He knew that his book was actually making an impact when he happened to meet a parent one day.

“When one morning, one of my student’s mother came to thank me, saying that her daughter informed her about being bullied in school after reading my book, I knew that my book met the purpose it was intended for.

That, by far, is the most fulfilling moment of my life!”

Books will continue to touch and change lives!